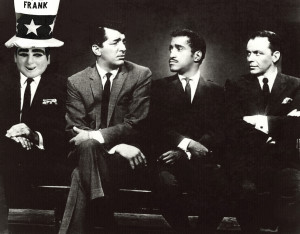 This archival photo depicts the “Rat Pack” circa 1960 on location in Las Vegas and proves the little-known fact that Uncle Frank Myers was one of the original members of the superstar performing group, along with Frank Sinatra, Sammy Davis, Jr., and Dean Martin.

As a matter of fact, Uncle Frank accidentally inspired their most well-known project, when Frank, Dino and Sammy bought beautiful Cadillac convertibles from his Las Vegas dealership. Uncle Frank declared at the price he was giving them, the cars were a “steal.” Sammy happened to be eyeing one of the big casinos when he heard the word and instantly came up with the idea for their hit movie, Ocean’s 11.

Unfortunately, that led to a break with the Rat Pack, as Uncle Frank couldn’t clear enough time for the filming – “Sorry, boys,” he said, “I got too many great deals I want to give folks.” He was replaced by Peter Lawford, who was not quite as good-looking as Uncle Frank, but got by.

Be sure to read History of Uncle Frank/Part 3 – Uncle Frank The Football Star and check back for future editions later.